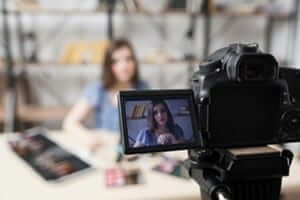 Social media has transformed video. After losing its lead to text in the early days of the World Wide Web, video has made a huge comeback, in large part thanks to the implementation of video in social media and the formation of new video-based networks.

Following the notion of “the medium is the message,” it’s interesting to see how video has changed in recent years so that it could fit the demands of new platforms and changing audience behavior and needs.

When considering using video content for your next campaign, also consider the following advice.

1. Change your point of view

Camera angles are more than just a technicality. Selfies, for example, are a statement made by the “me generation” that no longer needs anyone’s help to create content. That is why it is not at all surprising to see the increasing number of over-the-head shot videos, making this filming angle a new standard, especially for anything food-related.

The bird’s-eye angle not only helps independent video creators film their work while minimizing external assistance but also creates an increased sense of involvement with audiences, who enjoy this first-person perspective and feel as though they are the ones filming. This new sensibility is important to understand even for those who can afford an entire film crew for their next branded content campaign.

The anonymous presenter—whose face often does not appear on screen at all—can be absolutely anyone, very much including the viewer. The poor man’s VR experience, if you will.

Brands and publishers have long realized that when audiences consume their content, they most probably consume only parts of it. In the case of video, it is the sound that usually ends up out of the picture: 85% of Facebook videos are watched without sound.

With that stat in mind, brands have had to innovate ways for delivering silent—yet impactful—messages, paying special attention to visual tactics, intuitive content, and context. Those who thought that video killed the text star have been proven wrong, with the use of subtitles and written text making up for the missing audio channel of communication. You could say that Facebook brought back the silent film genre, title cards included.

A unique example for a brand that turned the tables on this new video consumption habit can be found in a campaign by cider-maker Kopparberg. The company included a hidden recorded message, inviting viewers who bothered to turn on the sound to participate in a prize drawing—a wonderful example of turning lemons into lemonade (or cider).

Traditional media outlets usually impose strict length restrictions on video commercials, but it turns out that even the toughest network could not compete with today’s audiences’ brutally short attention spans.

Advertisers are facing a much tougher challenge in reaching an audience that is anything but captive, so the first rule of ad clips is shorter is better. So much so, that tech giant Google has introduced six-second ads on YouTube to try to prevent advertisers from losing their audience.

Forget about building tension or saving the best content for last; brands advertising with video should start with a bang, or there will be no one around to watch the rest of their ad.

The TL;DR culture is also responsible for the rise of the skip option. Shared videos on social media come with a gracious recommendation to skip the irrelevant parts and begin watching at, say, 1:23. Once again, we see leading tech companies cater to their users’ needs, with Facebook allowing users to go straight to the parts on a livestream that other users responded to most.

Publishers that value video content—such as The Hill and Red Bull—are also using content creation tools that enable users to skip the boring parts of lengthy video content. That is why content creators who feature or curate content should forego the less relevant or interesting sections and keep only what they feel their viewers will actually watch.